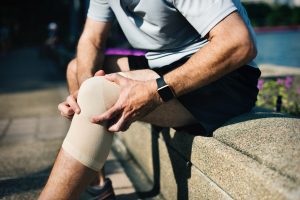 Knee replacement surgery is indicated when someone has irreversible damage to his knee. In younger people, this generally happens due to a tear in one of the ligaments. In older people, this might happen due to deterioration, fracture or arthritis.

How does it work?

The knee is made up of three bones as well as many muscles and ligaments. Unlike the shoulder and hip joints, the knee has somewhat restricted movement. This makes it more like the ankle and elbow joints, which are made to move only in certain ways. Because of this, movements that are beyond the joint’s capabilities can put undue stress on the knee. Most knee trouble in younger people are due to sports injuries. Players often push their physical abilities to the max. While a hardy, young body can handle that, sometimes it’s just too much. A sports injury can put a player out in the hospital for surgery, and that can at times result in a knee replacement.

What happens in the younger set?

In most cases, if a young, healthy person complains of knee pain, it’s most likely to come from the knee cap. Sometimes a workup will show no issues at all. In these cases, rest and potentially physical therapy will help him back on the road to recovery.

When there is a problem, it’s often a torn ligament. The anterior cruciate ligament is a main ligament on the inside of the kneecap that can become disturbed via injury. If not treated, it can cause more damage and pain.

Soccer, Football, skiing, baseball and hockey are all good examples of sports where a player might move the wrong way and damage his knee. While this is more likely to happen at the professional level, a player at any level can cause himself damage. In rare occurrences, anyone can slip or make a wrong move, even off the field, and land himself in the hospital.

What happens in the older set?

Older people are more prone to knee injuries and knee replacements for several reasons. One is that they simply have used their knees more, and all human parts deteriorate over time. Another main cause is arthritis. To keep the knee in shape, there are many treatment options before a patient gets to the surgery level. An important remedy is weight loss, as weight puts undue pressure on the knee that it can’t support for a long time. If a person ages without losing weight, he puts his knees at risk. Therapy and medications can often put a knee back in function, and if necessary, a brace can support the knee and give it a longer life.

If a person experiences knee pain, steroids can help with inflammation. Doctors will often prescribe lubricants that “grease” the joint, reducing the friction and clearing up the pain.

When knee replacement surgery is called for

When the pain gets too strong or function decreases, and alternative methods are helping, you may be in for a knee replacement. There are two options for the surgery.

The first option is a partial knee replacement, where usually either the inside or the outside portion of the knee is replaced. This is usually prescribed for someone younger, who may have only partial arthritic knee damage. There’s a higher likelihood of success for a partial replacement to fix the problem.

The second option is a total knee replacement. This is called for when there’s too much damage, and a partial replacement won’t solve the problem. The knee is replaced with matching pieces that are constructed from metal and strong plastic.

After knee replacement surgery, the patient must rest up and decrease physical activity until healed. He may go through a therapy regimen to regain functionality.

At the Alameda Center, we offer a range of rehab options for patients who have had knee replacement surgery. We provide premium short term rehab, as a bridge for patients to move from hospital to home, as well as longer term care options for patients to fully heal. Our doctors and therapists work with the patient to  create a holistic treatment plan, and our supportive staff is there every step of the way.